It's time for a random catch up post where I tell you about all the things that have gone on that weren't important enough for their own post.  :)

After the Boston Marathon trajedy, I got together with some runners at my favorite running store for a run/fundraiser for a charity in Boston, and to show our support.  They had some shirts made, and I got one.

I babysat my grandmother's puppy (Charlie) for a weekend.  I was thinking about getting a dog, and have started some necessary renovations to my house (easier back door and fixing the fence, etc)- but after a weekend with a puppy I am not sure that I am quite ready!  I definitely did not realize that dogs came with so much stuff!!

Charlie was not exceptionally well behaved, and so he had to wear a doggie diaper most of the time he was here because I had to clean the floor one too many times!  I was thinking that I wanted a puppy, but now I am thinking I may need an older dog without so much energy!!

I got hit with a major case of seasonal allergies.  It was terrible.  I am usually lucky and don't have too much allergy trouble, but unfortunately not this year.  I had to give a presentation in a town about half an hour away, and to make this sickly girl even more unhappy, it was after hours.  Working 12.5 hours (as opposed to my normal 9) was not what the doctor ordered.  I tried really hard to have a fever so I didn't have to do it.  Ha!  This was when I was trying hard to convince my boss that I was too sick to go.  As a side note, I am loving all the neon colored clothes out lately.

There was a Turkish Food Festival close to my house, so my mom and I went.  Here's what I ate (minus some delicious chocolate cake and also baklava):

I think they were expecting about half as many people to show up than actually did.  There was not a lot of available seating and the lines for food were long.  But everything was good and I would definitely go back next year.  I also signed up for some Turkish cooking classes and they said that they would send out an email before the next round of classes, so hopefully I can fit the classes in my busy schedule!

My church had a talent show/fundraiser on May 5.  The "celebrity" judges were Miss Arkansas, a local news anchor, and the head basketball coach of UALR.  It was a fun time!  It was like a dessert theater and several people in our church baked items for the dessert time during intermission.  I made luau cupcakes:

I also got my picture taken with Miss Arkansas and Steve Shields (the basketball coach).  Bob Clausen ran away right before the picture so he missed out.  :)

I bought some tulips for myself, and they finally bloomed.  Unfortunately they didn't last long.

I think that's enough randomness for one night.  Ha.  Next up will be an update on the Warrior Dash I ran in Amity (don't feel bad if you don't know where that is, because I have been there and I still don't know where it is haha!) last weekend with my friend Shannon!
Posted by Jessica at 9:23 PM No comments:

A couple of weeks after the Poker Run, I ran in the Capital City Classic 10k. It was a nice flat course and I beat my previous 10k time by a couple of minutes. It was a great race and I hope to do it again next year.

The following weekend, I went up to Fayetteville and ran in the relay of the Hogeye Marathon with three other girls. I had the last leg, which was supposed to be 6.7 miles and ended up being 7. That little bit normally wouldn't matter that much, except that Fayetteville is so hilly! The worst was at the end, right before the finish line, there was a giant hill that we had to climb. It was hard for me and I can't imagine how hard it was for the people who actually ran the whole marathon!

When I left for the race at 5:45 in the morning, it was dark so I didn't even think about sunscreen. I got so terribly sunburned! Next year, I will have to remember that for sure! I have a really random tan line, and the craziest thing was that i got sunburned around my chip timer! we had to wear a velcro strap around our leg so that we could all four share the chip timer. I learned a lot about how the relay works this time, so we would do much better next year. I had about 3.5 hours before my leg started so I went to Walmart to use the bathroom (better than a porta-potty) and then cheered for some of the 5k and half marathoners.

I ran into quite a few people that I hadn't seen in a long time, so that was fun. I wish I could have run a little faster, but overall I was definitely proud of our team! 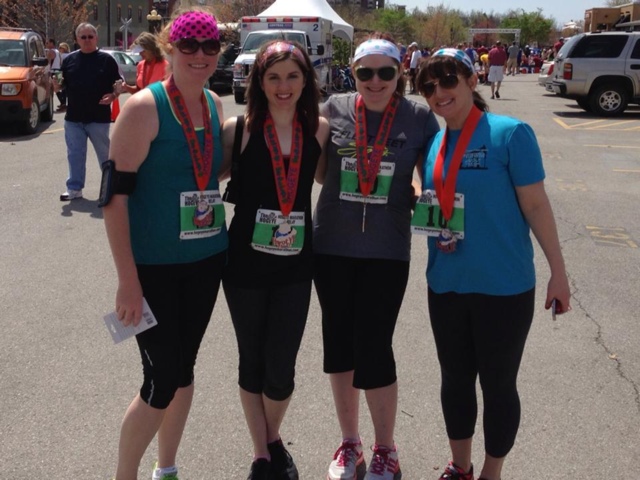 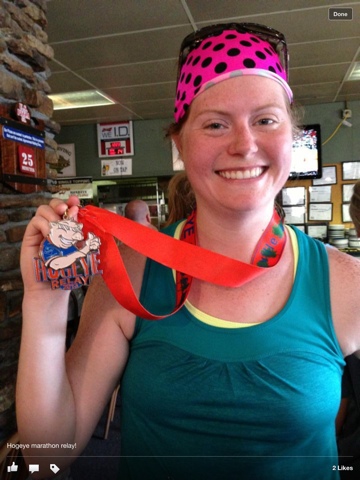 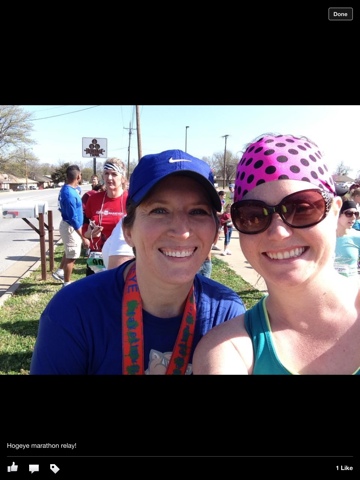 Posted by Jessica at 3:58 PM No comments: